Hero's Welcome
A drama with music
﻿Winner
1982 Theatre Ontario
New Play Award
and the
Ottawa Valley Book Festival's inaugural
Dave Smith Playwrighting Award
(1990)
﻿An intense, absorbing drama that centres on the events and  remembrances of a Canadian soldier's return to  his small town home
near the end of World War II.  The fears  and doubts that he brings home with him combine with those he had hoped had been buried at home, but which  were, in fact, simply waiting for his return.  Told  in a unique and very theatrical style, the story, based partly upon the author's father's war experiences, is at once universal and familiar.
View in Modified London Format
View in Classic Play format
﻿"(It) all has the ring of authenticity and of truth.  Playwright Jacklin (too young to have lived through the 1940s) has captured the feeling of the time brilliantly. I could have sat, uncushioned, on an authentic bed of nails and been unaware of anything but the stage. (It's) that good." CBC Radio One
HOME 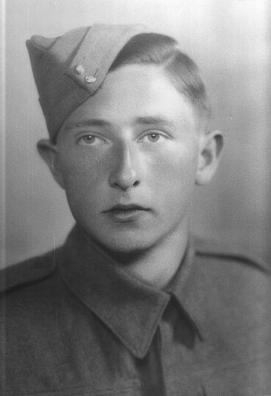