A very old musical comedy
from the original by Aristophanes
SEE PRODUCTION TERMS HERE
In 411 B.C., Athens and her Empire were in the middle of a war against Sparta and her Pelopennesian allies --  a Greek civil war, in fact.
The war had dragged on for nearly twenty years, with no end in sight.

This is the ultimate "women's empowerment" play!
(Except maybe for Medea, but we won't go into that.)

With Greece in a semi-permanent state of war, Athenian housewife Lysistrata comes up with a strategy to bring the conflict to an end and enlists the aid of all of the women of Greece.  The plan is simple: "No piece without a peace."

The women of Athens occupy the Acropolis and vow to withhold
sex from their husbands until the war is stopped.
It's hard for them, but then, it's hard for the men, too. 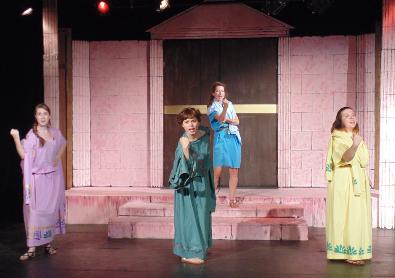 Some audience comments from the premiere production (August 2017)
"Naughty -- but fun"
"Hilarious"
"I love it!"
"It's an education!"
"Thoroughly enjoyed!"
"Entertaining and hilarious!"
"That was jaw-dropping!"
"They should do this in New York."
Above: Lysistrata's Plan -- "They cannot stand for long, if they have to stand for long."
Below: It gets physical -- just not the way the men want. 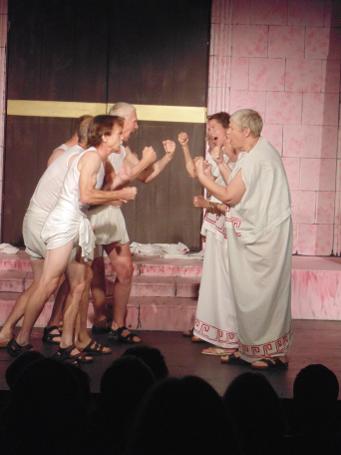 With a brand new script of fast and funny dialogue, a score of snappy, jazzy songs that both send up and pay tribute to the classical style and a new twist in the tail that gives the show some extra bite,
David Jacklin's LYSISTRATA
is fun and entertaining theatre and as well as being smart and thought-provoking. 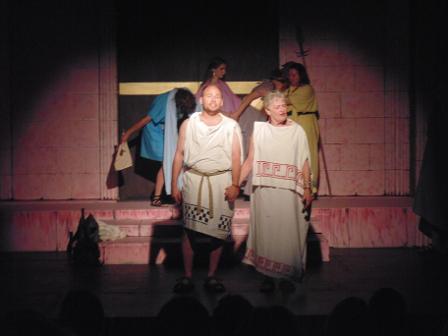 Philostratus and Stratyllis explain that "There is no happy ending to this play."
View the script in Modified London format
View the Piano/Vocal score
Go to LYSISTRATA video page 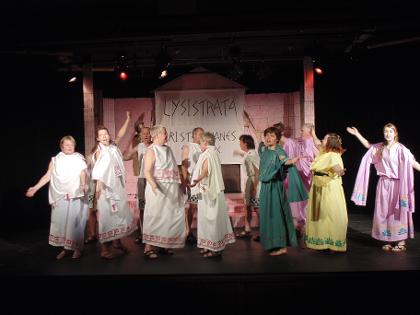 The Company announce the play "Lysistrata, by Aristophanes!" 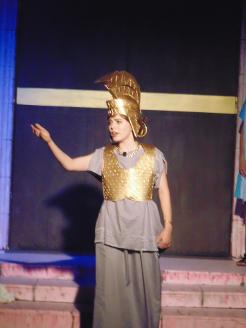 Lysistrata appears as Athena
Characters
Lysistrata: an Athenian woman, the ringleader
Calonice: her earthy BFF and neighbour
Myrrhine: a young Athenian woman, newly married
Lampito: a Spartan woman, all muscle
The Magistrate: a city father of Athens
Cinesias: the soldier-husband of Myrrhine
Stratyllis: the leader of the women's chorus
Philostratus: the leader of the men's chorus
A Spartan herald
Spartan Delegates
Athenian Delegates
A Chorus of Old Women
A Chorus of Old Men
Other young women and men
IInstrumentation: 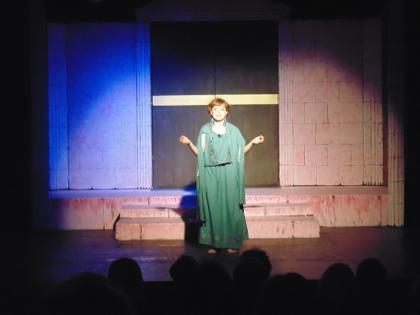 The song "Lycon, My Husband" is actually based on pieces of Greek music that are among the oldest notated music in existence.
MUSICAL NUMBERS
Act One
A Greek Overture
Athens
Lysistrata's Plan
A Greek Scene Change
The Entrance of the Chorus
Shut Your Mouth
All You Men
All You Men, reprise
Lycon, My Husband
Act Two
A Greek Entr'Acte
O, Melanion
Baby, I'm Not Sayin' I Don't Love You
Baby, I'm Not Sayin', reprise
The Entrance of Reconciliation
My Mama Never
Io Paean
When Sparta's Army Ruled The Hills
Io Paean, reprise
A Greek Curtain Call 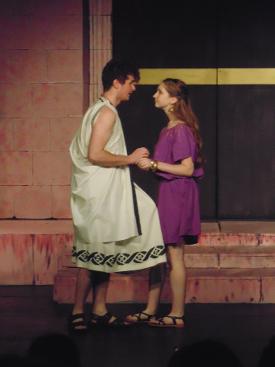 True love and a phallus -- what could be more Greek? 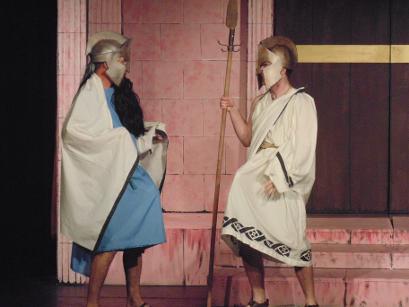 Back To Musicals
Continue to next musical
HOME