Lives  In The Attic
A politico-rural comedy
﻿Winner of the
Ottawa Valley Book Festival's
1991 Dave Smith Playwrighting Award
﻿An outrageous, funny and farcical show about bureaucracy and the little guy.

The Keilly family have been farming on (and fighting for) their land for more than a hundred years, but the Department of Land and Resource Management think it would be put to better use as a toxic waste dump.

They hadn't counted on the Keillys, who don't own a phone, won 't open mail and think they should be able to just do things their own way!

﻿The comedy is both physical and philosophical as the Keillys' fight to save their home leads to an in-and- out-the-doors chase, an exploding outhouse and more.
View in Modified London format
﻿". . . a lighthearted romp with just enough truth to get the audience thinking. . . highly entertaining. . . a surefire crowd-pleaser. Jacklin gets in some delightful barbs at bureaucrats, politicians, nepotism and progress."  The Ottawa Citizen
HOME 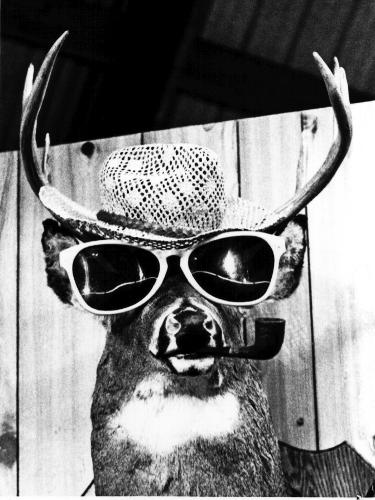 Above: The only surviving photo of the premiere production in 1986.
Zeke Cervidae as Orville
﻿2 acts; 110 minutes plus intermission;
3 male (1 plays 3 roles!) / 3 female / 1 tractor; simultaneous setting
PRODUCTION TERMS
Back To Plays
Continue to next play