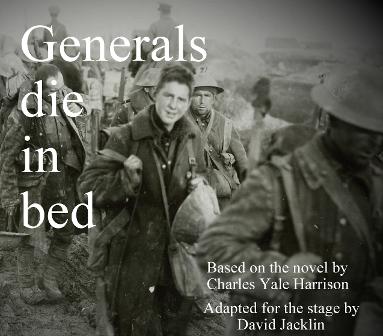 View in Modified London format
The script  above includes the vocal score-- within the text!
"Another gem.
Never capriciously graphic or gory, yet still effectively communicated the absolute
absurd horror of war.
Community theatre at its finest."
Z.F., New Brunswick 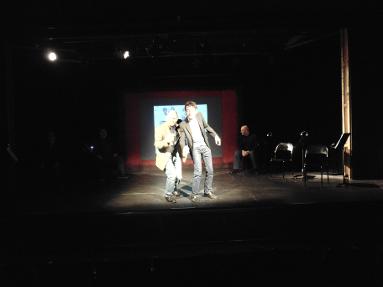 Voulez vous couchez avec moi, c'est soir? April 2019
A long forgotten Canadian classic
When Charles Yale Harrison’s Generals Died In Bed appeared as a novel in 1930 (it had been serialized in 1928), it was received with rave reviews everywhere and became an international best-seller, something nearly unheard of for a Canadian book, at least, one not written by Lucy Maude Montgomery.  Toronto's Globe & Mail said: “The importance of this book cannot be overstated.”
The book was compared favourably to All Quiet On The Western Front and For Whom The Bell Tolls. 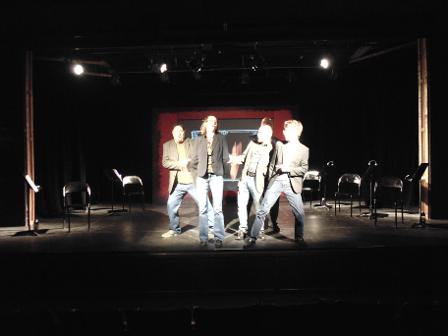 That's The Wrong Way To Tickle Marie April 2019
Go to the GDIB video page
"If you haven't seen this yet...GO!
I saw it tonight and want to see it again...right now!
It was so moving. I really don't have the words to describe the range of emotions I felt but everyone needs to see this. GO!!
It was absolutely superb!!"
K.B.,  Gillies Corners 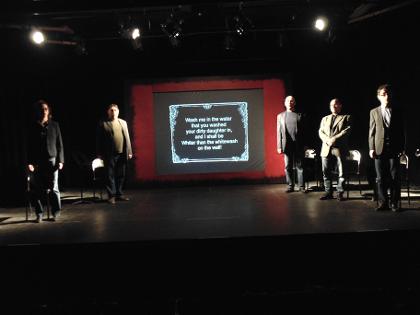 Whiter Than The Whitewash On The Wall, April 2019
View the Piano/Conductor Score
"What an amazing production!
Theatre at its best.
David Jacklin has written a masterpiece.
You will never see the realities and absurdities of war depicted as in this fantastic production."
J.S. Perth 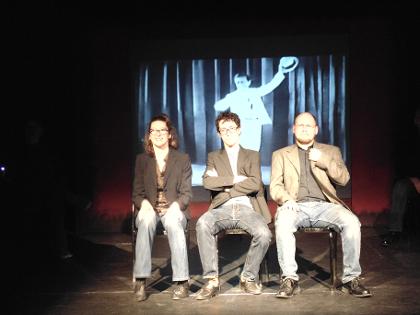 Oh! Oh! Oh, It's A Lovely War! April 2019
What the critics didn’t take into account was the anger of generals, in particular, Canada’s Sir Arthur Curry, arguably the best general (on both sides) of the war, but not the best literary critic. “I have never read a meaner, nastier and more foul book” said the general, angered by the book’s implication that he had told Canadians not to take prisoners at the Battle of Amiens in August of 1918.  In consequence of that anger, the book was condemned and largely suppressed in Canada, meaning that it disappeared from bookshelves and libraries.  It was not until 1970 that it was re-published and brought back to light. 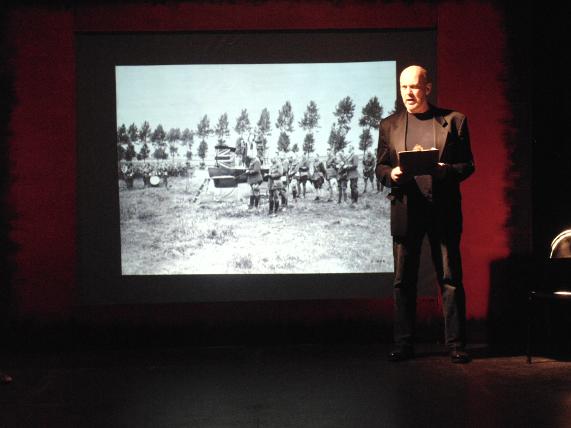 The sinking of the Llandovery Castle, April 2019

A soldier, whose name we never learn
Anderson, a religious private from Northern Ontario
Brownie, an unlucky private
Fry, a private
Cleary, a private
Broadbent, the 1st soldier’s good friend
The sergeant
A befurred girl in Montreal
Captain Clark, an English officer
An English tommy, who doesn’t like German lice
An MP (Provost)
Karl’s brother, a German soldier
His friend, another German soldier
The Colonel, of the soldier’s battalion
An army doctor
Gladys, a Cockney prostitute
Renaud, a French-Canadian soldier
A German sniper, with three children
A lieutenant, from “D” company
An old French woman (who’s probably 40)
Captain Penny, who replaces Captain Clark
The Doughboy, an American soldier from Tennessee
The brigadier-general, of the soldier’s brigade
An English WAAC, who’s got mumps under the waistcoat
A German officer, who is a POW 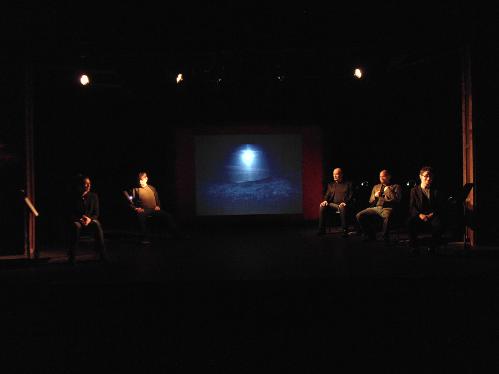 It is night, April 2019
Generals Die In Bed completes what I think of as my "war trilogy", along with Hero's Welcome and MapleLeaf Up/Mapleleaf Down.
It's not a full-on musical, but it's definitely more than a "play with music". We are a little ahead of schedule with this: when our planned production of our new musical, The Diaries of Adam & Eve, couldn’t find a cast, we had to reach forward two seasons to bring this show into the playbill – we hadn’t planned to do this one until 2021!
We believe that Generals Die In Bed remains the “burning, breathing historic document” that the New York Times dubbed it in 1930.  Perhaps, even more so in the perilous times we face today.
Musical Numbers
﻿                              Act One

﻿2 acts; 85 minutes plus 1 intermission
bare stage with 6 chairs and a projection screen
6 performers (?) -- 5 male (?) / 1 female (?)
NO special costumes -- NO props
Multi-media video backing which includes all music and audio is available on DVD

(NOTE: the motion picture/photo montages and all the audio used in this production are from archival sources that are now in the public domain across the world.)